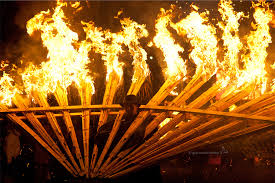 This winter festival is unique to Agnone, in alto Molise, which is believed to have originated as a Samnite festival of fire when the torches, or ‘ndocce’ were used during tribal shifts that usually took place at night, as s source of light.

Later during Christian times, this tradition of burning torches continued as a festive way for the community to light their way across the fields to church in the town centre. There is one main event on the 8th of December, for the annunciation, and another smaller one on the 24th. After the 9th Century, local farmers began to take up the tradition, using these torches to illuminate their paths from the countryside to the many churches in the town of Agnone on Christmas night. Different traditions reflected the changing times; in the middle ages it was believed that the fire would ward off witches, later the torches were built ever higher and larger for the youth of the town to impress a chosen girl. This ardour could be quelled by a bucket of water if she was not impressed!

Easter in Agnone with Jenifer: get an idea of the programme

After the parade to St Anthony’s church, the Nativity would be staged, when the burning torches were thrown on a bonfire to symbolise the casting out of negative feelings and a renewal for the year to come. The staging of the nativity is one of the features of today’s festival on the 24th of December.

Click here and watch the video-  discover the traditions of a historic town, and get to know the locals

The enormous ‘ndocce, 3 to 4 meters high, are torches made of silver pine, indigenous to the region, with bundles of dried broom held together by twine. A group old men, well trained in this traditional craft, start to prepare the torches in the middle of summer: it is a long and laborious process. First they shape then dry the wood, shape again, and finally form fan-like structures.   As many as 20 torches can be assembled together to form one structure. These are carried by men wearing long dark cloaks and black hats or hoods, beautifully lined and in heavy wool. This costume is derived from the ancient cloaks of the Samnite warriors.

by Jenifer in Agnone, Molise

The original Italians and the mystery of the Tavola Osca

Antonio Pappano on Verdi at the Italian Cultural Institute